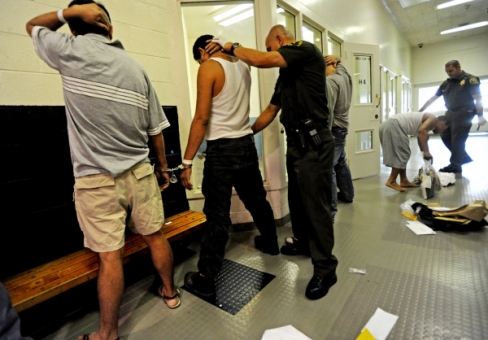 President Barack Obama’s plan to redirect federal funds to the southwest border could mean Orange County stands to lose nearly $6.5 million in funds to house illegal immigrants with criminal convictions – while the state could lose $110 million.

Local and state officials have joined members of Congress who are up in arms about Obama’s announcement last week to kill a program that has provided about half a billion dollars in federal funds to states and local municipalities for the incarceration of illegal immigrants with criminal records.

“We expect that we are going to have to fight a battle that we are too familiar with fighting,” said H.D. Palmer, spokesman for the state’s Department of Finance.

About $400 million will still go to communities in fiscal year 2009 for the jailing of illegal immigrants who have been convicted of at least one felony or two misdemeanors. However, the $950 million authorized for fiscal year 2010 was scrapped by Obama’s budget.

In Orange County, the latest proposal is just one more bit of bad news for officials at the Orange County Sheriff’s Department, which is already in dire economic straits.

“The department is facing a mountain of economic challenges in the upcoming fiscal year and we would hope that Congress would see to it that we wouldn’t have to add another $6 million to that challenge,” department spokesman John McDonald said.

The department booked 12,515 inmates in 2008 who qualified under the program guidelines. That’s about 19 percent of the estimated 65,000 inmates booked each year at county jails.

The money funds deputies’ salaries, food for the inmates and other costs associated with the holding of these particular inmates, McDonald said.

“We’ve made a lot of budget cuts already. For instance, we closed the tents at the Musick facility,” he said about the closure of the 360-bed unit at the James Musick jail in February. Sheriff’s officials estimated that the closure would save them $1.2 million a year.

The federal money also pays for about 11 cents on the dollar in the cost of housing illegal immigrants with Immigration and Customs Enforcement holds, California Department of Corrections spokesman Seth Unger said.

As of March, California prisons held 22,063 inmates with confirmed or potential immigration holds. That’s about 13 percent of the 168,000 total inmate population, Unger added.

“The (program) provides a partial subsidy for the cost of incarceration in state prisons and county jails of illegal aliens who already have committed crimes, but does not help states and communities combat crime,” Department of Justice spokeswoman Melissa Schwartz said in a written statement. “Instead, the budget provides $2 billion in DOJ resources to help curtail illegal immigration and combat the violence associated with trans-border gangs and illicit gun and drug trafficking.”